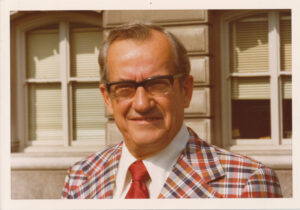 Leslie J. “Sam” Wise was born May 16, 1918, to Leslie Oliver and Floy Mildred Wise in De Witt. The family later moved to Polk County. Sam graduated from North High School in Des Moines and was a student at Iowa State University, studying farm operations, when he was drafted into the Army.

During the war, Sam saw action in North Africa and Italy and was awarded three Purple Hearts for injuries he suffered. Sam told the Des Moines Register years later that at the time, he didn’t look on it too fondly, but later he realized he had learned a lot about leadership, working with people, and getting along. 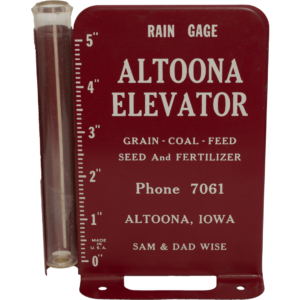 After the war, he didn’t continue his college career. Instead, he worked for his father in the grain elevator business. His brother owned the Runnells elevator, while Sam and his father “Dad” Wise owned the Mitchellville and Altoona Elevators. The Mitchellville Elevator was sold off in 1951.

Sam and “Dad” Wise bought the Altoona grain elevator in 1950. Sam had worked at his father’s grain elevator in Mitchellville after mustering out of the Army following World War II, and they continued the partnership in Altoona until his father died in 1964. Following his father’s death, Sam sold the business to settle his estate.

In 1960, Sam would become Mayor of Altoona, serving three separate stints, and is currently the second longest-serving Mayor in Altoona history, with only Tim Burget serving longer.

His first stint as mayor ended in 1962. Sam stepped down as mayor, due to “the press of business affairs” after expanding his business to Colfax. 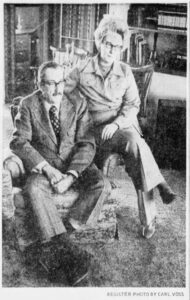 He decided to run for mayor again in 1963 and was elected, serving for 10 more years. His second stint as mayor ended on February 4, 1974. That’s when the Polk County Board of Supervisors appointed him County Sheriff after Sheriff Jack Woodward was killed in a car accident. Wise would only serve as Sheriff for 10 months, losing the election that Fall.

While his time as Sheriff was short, it was immortalized for more than 40 years at Adventureland, with a theater named “Sheriff Sam’s Saloon” in his honor. Sam had a close friendship with Adventureland founder Jack Krantz. The theater has since been renamed  “Samuel Adams Saloon” due to a sponsorship deal with Samuel Adams beer. However, the fictionalized depiction of “Sheriff Sam” is still mentioned in the pre-show narration on the Underground ride at Adventureland.

In 1979, Sam ran for a third stint as mayor, unseating incumbent Lloyd Sievers. He was reelected in 1983 and decided to retire in 1987.

Sam was a major proponent of improving the city’s infrastructure. He pushed to pave all of the streets in Altoona, widen Highway 6 (8th Street), and build a new wastewater treatment plant. 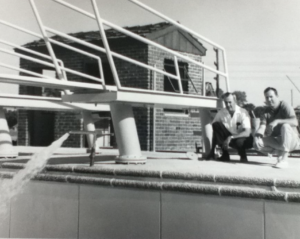 One hot summer day in 1968, “two little girls” came to Mayor Wise’s home and asked him why Altoona had no swimming pool. Sam had no answer for them, but it was an idea that he pushed the City Council to take up, and got the Council to work on a bond issue. That same summer, Altoona voters approved bonds totaling $100,000 to finance a swimming pool. More than 65-percent of those voting favored the bond issue, which required a 60-percent majority for passage.

The size of the pool was 5,200 square feet with a capacity of 250,000 gallons. The pool was lighted and had a twelve-foot diving board. The pool was “Z” shaped with a central swimming area that met Amateur Athletic Union specifications for swimming meets.

Branching off one end was a 30-by-30-foot diving area and a 30-by-40 foot area for beginning swimmers branching from the other end of the central swimming area.

The pool was constructed that next summer, in 1969.

Sam served as president of the League of Iowa Municipalities, was appointed to the Iowa Agriculture Stabilization and Conservation Committee, and served on the board of the Altoona Savings Bank.  He was also a member of the Altoona Christian Church, American Legion, Masonic Lodge, and Elks and Lions clubs. 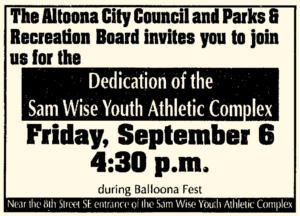 The Sam Wise Youth Athletic Complex was dedicated on September 6, 1991. Then-Altoona Mayor Tim Burget presented a dedication letter to Sam’s wife Jean and sons, Steve and Ted. Burget noted Sam’s many contributions to the park system of the city during his long tenure as mayor of Altoona.

“We wanted some way to honor this man who had contributed so many years of service to his community,” Burget told the Altoona Herald. “We had tremendous growth of parks and recreational facilities while Sam was mayor, and he was instrumental in creating the Youth Athletic Complex, so it was only fitting to name the city’s biggest park after him.”