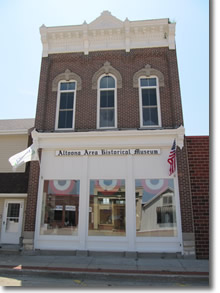 The Old Porter Hardware building is located at 104 2nd Street SE in Olde Town Altoona. It was originally built during the 1870s by R. A. Crawford. The building was constructed using brick manufactured by the Haines Brick and Tile Company. Jess Porter opened his hardware business in the building in 1919.

Helen and Jim Blaney purchased the building in 1982. While operating Back Door Fabrics and an insurance agency at the location, the Blaneys worked to preserve the building in its original state. Still intact are a hand-operated elevator, original wood floors, and over 400 drawers made from ammunition cases.

In December of 2006, the City of Altoona purchased the Old Porter Hardware building to use as a historical museum for the city. The Altoona Area Historical Society houses its collection of thousands of items relating to Altoona history in the building. Each year, hundreds of people tour the museum.